It’s Friday, meaning it’s time to get serious & dig into some names worthy of a pickup in your FAAB runs this weekend. Whether you gauge it by hottest bat of the week, 2 good starts, or just someone to get me by until so-and-so is healthy it can be a make or break moment.

Here’s 4 Players to kick off your search to inject some life into your fantasy baseball squads from the Front Office Writing Staff (ESPN % Owned): 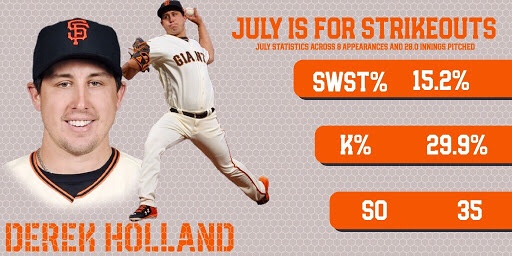 Everyone likes a comeback story, particularly when it is not expected. Derek Holland has been largely a forgotten man the last few years. But slowly, Holland is becoming a pitcher worthy of a look. 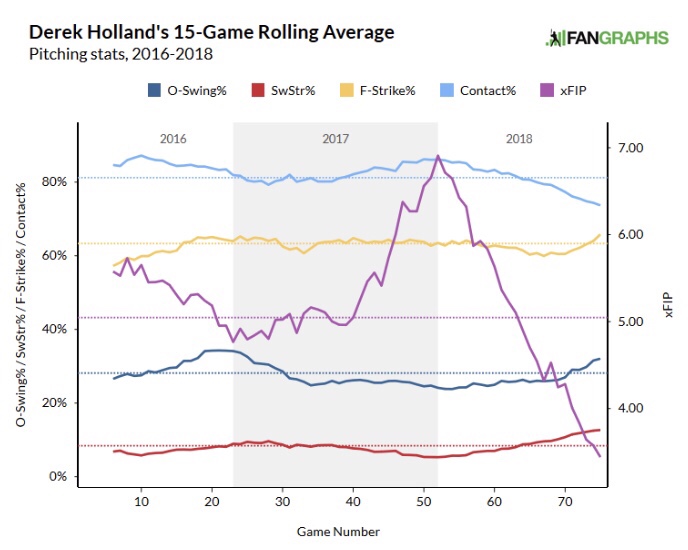 In July, Holland caused a swinging strike on 71 pitches (15.2%) which was a top 15 performance. It appears that Holland has ditched his four seam fastball and increased his slider usage, his most effective pitch. Additionally, Holland has seen improvements in his underlying skills, most notably chase rate, contact percentage, and first strike percentage. This has led to an increase in his K% by 7.4% (to 24.0%) and a decrease in his BB% by 3.4% (to 8.6%). Based on reputation alone, Holland is WIDELY available and worthy of your attention once again.

This is probably your last shot at Cron before he hits 50% owned by Monday. Be on the lookout for him as a shot in the arm here down the stretch. He’s been able to produce at such a pace that will put him 30HR+ & with the revamped lineup (Pham & Bauers) should provide more RBI opportunities as well.

Headed back to Tampa Bay with this one. Jake Bauers is someone who, if he isn’t on your radar, should be on your radar. The lauded prospect has arrived & solidified his stance in the daily lineup with the power output in the last 30 days. Time is running out to get him at a “discount,” especially in keeper/dynasty league formats.

Nope, not THAT Will Smith, but at the moment in San Fran he may as well be the Fresh Price of Saved Games. After the role of Closer bounced around following Hunter Strickland’s boneheaded move of punching a wall & landing on the DL (still a few weeks away), the powers that be finally gave him the ball to close things out & it’s been magic. It’s only happened a handful of times so far, but those scrappy Giants are keeping games within reach most nights meaning he’s got opportunities. Reyes Moronta will be knocking on the door to take his shot at Closer, but as long as Will keeps this up he should hold off Strickland when he comes back.