It’s Friday, meaning it’s time to get serious & dig into some names worthy of a pickup in your FAAB runs this weekend. Whether you gauge it by hottest bat of the week, 2 good starts, or just someone to get me by until so-and-so is healthy it can be a make or break moment.

Here’s 4+ Players to kick off your search to inject some life into your fantasy baseball squads from the Front Office Writing Staff (ESPN % Owned):

Do you want to know how much of a clown show the Mets have become?  Jose Reyes, he of the -0.7 WAR, has accumulated 212 plate appearances in 2018.  Meanwhile, their top prospect, Peter Alonso, is toiling in the minors (32 HR, 107 RBI).  However, they HAVE brought up one of their lesser known prospects, Jeff McNeil. So, they got that going for them, which is nice.  He’s likely the only valuable Met on your waiver wire (16% ownership on Yahoo) and he needs to be picked up for the stretch run in any league with twelve teams or more.

McNeil was the 356th player taken in the 2013 draft. During his first six seasons in the minor leagues he’s been nothing more than an infielder with good plate discipline and zero power. That was until this season. He mashed 19 home runs in 88 games between AA and AAA. What’s most impressive about that power surge is that he was able to maintain his plate discipline, with strikeout and walk rates both hanging around ten percent. He was called up on July 24th and since that time all he’s done is hit (.330 AVG).  In fact, in the last 30 days he’s 12th overall in batting average. His success in the majors has been mostly legit.

McNeil’s 2018 minor league home run power has yet to translate to The Show, but he’s a guy that can definitely help you with batting average.  If the pop ever decides to show up, which wouldn’t be that surprising (see pic), then he may sprinkle in some RBIs hitting out of the 6th spot. 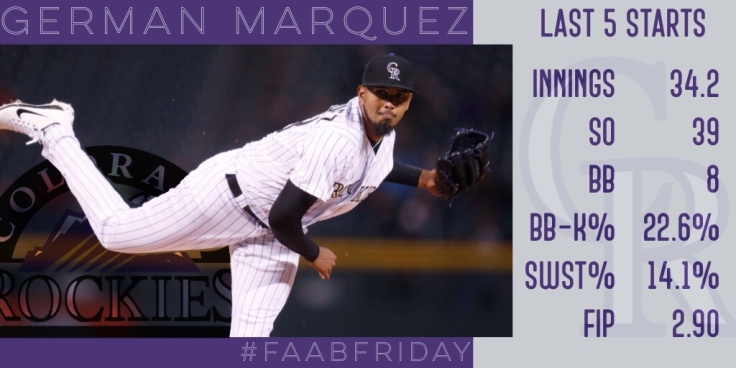 Sometimes it’s hard to get past the stigma of being a Colorado Rockies pitcher. Many have tried, few have succeeded. German Marquez looks like he could be another.

Over the past month, Marquez has a been among the top 15 pitchers in both K-BB% (22.6%) and swinging strike rate (14.1%). It appears that Marquez is altered his pitch mix and is throwing his slider more often. This season he has thrown the pitch 15.0% of the time against 4.1% in 2017. In his last start against the Braves, he threw it a whopping 25.8%. That has been resulting in more strikeouts, but not in the way you’d think. His curveball has been better as a result. During the last month, batters have whiffed on Marquez’s bender 27.8% of the time.

Change in approach should get your attention if the strikeouts haven’t. 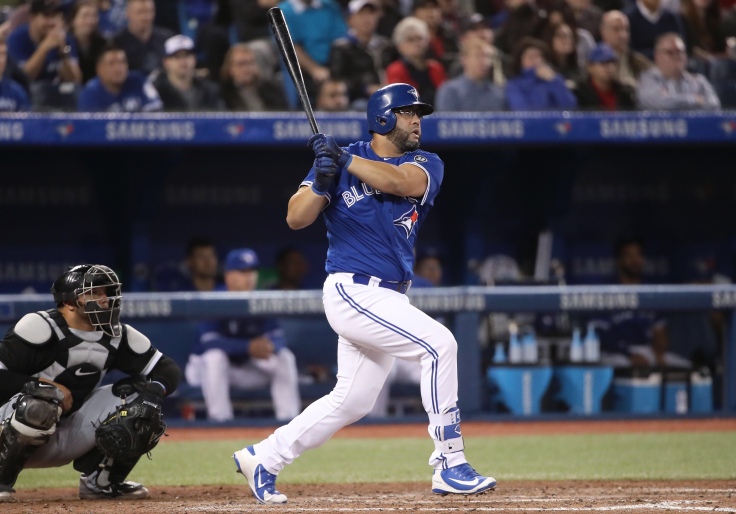 Kendrys Morales has been lighting up the scoreboard of late. This week alone he’s been other worldly, 4 straight games with a homer (5 HR in 4 games), hitting for a .571/.571/1.286 triple slash over the last 7 Days. Who doesn’t need a bat like that in your fantasy lineup heading into your league’s playoffs?

Some may argue that Fiers has been the steal of the August trade period, there’s solid evidence to support it. If you’re not on the train, past this weekend may be too late. He’s jumped 24% ownership in the past week, this weekend will be another jump. Fiers has seen a rise in K/9, from 6.5 to 10.3 across his 3 starts with the Athletics. This has been accompanied by a 75% reduction in BB/9 from 2.0 to 0.49 since leaving Detroit. It’s amazing how changing team cultures and philosophies can affect a pitcher!

His FIP & xFIP are close during his Oakland stint, 2.61 & 2.54 respectively, major improvements from his Tigers stint in the 4.5+ range. He’s due for some regression, as he won’t strand 98% of baserunners over the next 6 starts, but the 51% GB rate is a nice sign toward the positive (from 38%).

Have a Need for Speed?

Look into the latest trends as of a few days ago for the fleetest of foot, seek out the best option to assist in your quest for Fantasy Baseball Victory!