If you are heavy into Daily Fantasy Sports, there is no doubt you are aware of and exploit handedness splits. That is, you seek out batters that have success against right or left-handed pitchers and avoid those that struggle.  It makes perfect sense in the DFS game.  However, there is also a place for season long roto managers to be aware of these matchups, particularly those teams with deep benches and daily roster changes.

In 2017, Alex Avila was extremely effective against right handers when he slashed .270/.398/.478 with 14 home runs across 332 plate appearances. He was worthy of a bench spot that could fill in on certain dates. That was, of course, before 2018 became his year of suck.  But, that shouldn’t stop us from seeking our 2018 Alex Avila.

Before we get into the data, a word of caution for the season long players. If you decide to roster any of these splits monsters, it will take some heightened roster management to make sure that they are starting when they should be. Some of these decisions take care of themselves as real life managers employ platoons in their day-to-day lineup management. But you shouldn’t let that cause you to have goose egg on your daily stats page.  Pay attention to your rosters and establish lineup alerts if they are available.

Red dots represent positive contributors regardless of the pitcher, green dots are masters of left-handed pitching, yellow dots control right-handed pitching, and blue dots, well, forget about the blue dots. Below are several highlighted players in each of the areas. In particular, players that are new to the league and fantasy managers may not realize their tendencies.

There is no fault in diving deeper. If you would like to see all of the players in tabular form, you can go here. 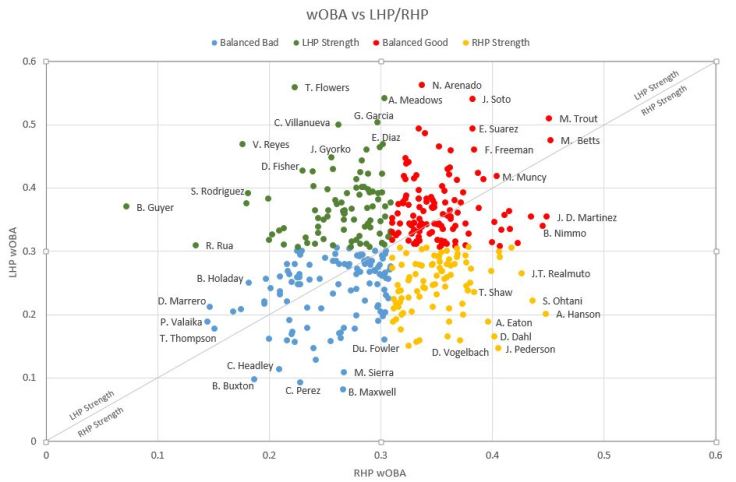 Managing roster splits with these players may be a wasted effort. They have been downright terrible all season.  Unless steals are part of the equation or improvement is eminent, it is best to move on:

While most of these players have some sort of handedness strength, their hitting is solid no matter the pitcher on the hill. No need to worry about matchups with these guys

Start these players with confidence against left-handed pitchers. Perhaps seek other options when a righty looms:

These players are all showing an advantage primarily against right-handed pitchers, and struggle against their left-handed counterparts:

In a follow up to Front Office Jeramy’s early season article that offered you Creative Solutions to the Catching Wasteland, Flowers and Suzuki still appear to be an excellent complement.  Adding to the potential catching tandems, Pittsburgh’s Einar Diaz and Francisco Cervelli (barring good health) have reverse splits.  Whereby Diaz clobbers left-handed pitchers and Cervelli right. I would expect Cervelli to handle a majority of the catching appearances when back, but Diaz will make an excellent fill in on those sitting days. As we learned this season, health is paramount in any catching decision as the position is brutal way to endure the baseball season.

In the next article coming soon, find out which batters have more success when at home or on the road, or maybe nine reasons that the Diamondbacks look better in gray.